Welcome to the sport of endurance, where tears can (and do) happen.

If I had to sum up the entire weekend into one word, I'd say: Wow. What an amazing experience. One ride and I am hooked on endurance!
Click Here To Watch Me Train For The Tevis Cup!

Asali and I arrived at ride camp around 2 pm on Friday afternoon. (Thank you to my mom who had loaded Asali for me and then driven the horse trailer down to Chico so I could leave directly from school. Mom drove my car home for me.) I set up camp - Asali's electric fence paddock and my bed (which I made in the back of the horse trailer). Afterwards, I checked in and then had Asali vetted. She had her pulse, respirations, capillary refill, and gut sounds checked. Then I trotted her away from and back towards the vet for a soundness check. She was marked with a 6, our competition number. We were ready to go! 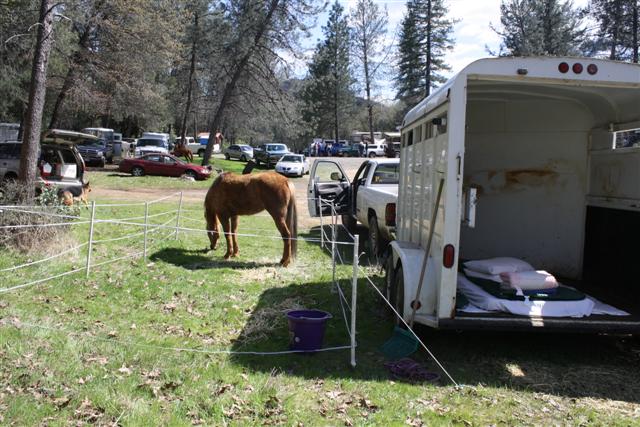 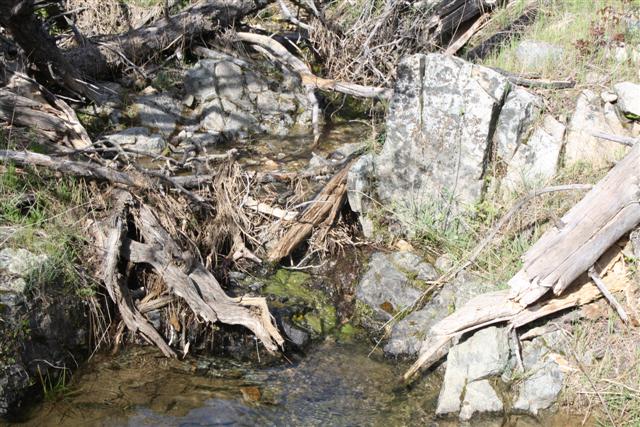 That night, at the pre-ride meeting, pot luck, and wine tasting (I just imagined us all riding hungover the next day - what a sight that would be), I began to make some new friends. I was invited by Kathryn and her daughter, Madison, to stay in their warm camper. While I'm not afraid of roughing it, I decided I needed a good night's sleep and accepted their offer, which saved me from sleeping out in 38 degree weather.

Five am on Saturday came way too fast. The hour and 45-minutes I took to dress, eat breakfast, enjoy a cup of tea, groom and tack up Asali went even faster. I barely remember mounting - the last thing I did was grab my rider card for the vet checks and jump on. Then after a countdown, we were off! I had planned on staying somewhere in the middle, but Asali wanted to move out in the beginning, so I let her go with the front runners.

Once on the trail, everyone was moving so fast. There was this energy that carried all the horses and riders, and it left me feeling exhilarated. Parts of the trail were extremely narrow - single track trail, with switchbacks. I remember looking out over the mountain and thinking, "I am so glad I'm not afraid of heights." I felt like I was rock climbing on horseback. It was definitely a technically challenging trail. Many people had commented that I had picked a tough 25 for our first, but Asali and I loved it.

The first 14 miles, we rode with many different groups. We hadn't yet found our place in the competition. I enjoyed this time though because I had the opportunity to share our story with many different riders on the trail, a place where memories are made.

We threw a boot sometime during the end of the first part of the ride. It didn't seem to bother Asali though, so we just kept moving. We vetted in sometime around 9:26... Asali pulsed down immediately! I was so pleased! The vet said he was impressed too and said I had conditioned her well. We were cleared to continue, after the 30-minute mandatory hold.

At the vet check, I put Asali's other pair of Boa boots on while she ate and drank. Then I ditched the polo wraps - they were sweaty and coming loose. I didn't really think she needed them anyway. (I found out later that polo wraps are never used by endurance riders - at least not during competitions. We're learning as we go - I figured out the polo wraps weren't going to work the hard way; the same way I figured out that jeans and field boots don't work in endurance.)

During the second part of the competition, we rode alone. I preferred it this way because it allowed me to make a connection with my horse and focus on the ride without the distraction of other horses and riders. I realized while we weren't with the front runners, we were somewhere in the middle of the pack. I had originally decided I was going to ride my first ride slow - only for the completion. But I changed my mind when we were out there and I decided I wanted a solid placing. When I switched to my competitive mind, however, I made a crucial mistake.

I was traveling on the correct trail, but for some reason, I thought I had missed a turn off to the last loop of our ride. I took my map out for a quick look, then turned Asali around, backtracked, and headed off on another loop. I didn't want to take the time to study my map and figure out where I was because I didn't want to waste any time. I convinced myself I was going the wrong way, even though I wasn't, and I fixed the problem immediately without taking a moment to re-group.

I didn't realize my error until I was almost to the finish line, arriving too early, knowing I hadn't completed 25 miles. I started crying. And then I begged. I told the ride volunteers I just wanted to finish my first ride. I knew we could do it. I asked them to connect me back to the loop and let me do it over again. The ride manager's assistant said she couldn't get me back to the loop I missed because it would take too much time - there were too miles of backtracking that would occur. But she said she could lead me up the street and point me to a connection - I could ride the entire last loop over again to get in my 25 miles. I had obviously lost my placing in the competition, but if I did the last loop again and finished by the cut off time of 12:45, I could get a completion.

We arrived at the trail head at 11:59. Asali and I had 46 minutes. I pushed her on the last loop - and I kept apologizing to her. It was my fault she had to "haul ass." I kept promising her treats at the end of the ride. She was amazing - she cantered around tight switchbacks and made it to the finish line at 12:22, with a ride time of 5 hours and 7 minutes. A group of volunteers cheered for us at the finish, but I was so exasperated, I didn't even realize they were clapping for us. The first thing I said when I dismounted was that I was afraid Asali wouldn't pulse down because I had run her so hard at the end. Then I said, "I just have to pee!" I think more tears followed after that.

Asali did pulse down. She was only one beat above the pulse limit of 60 at the finish line. After a drink of water and about 90 seconds later, she pulsed down. I was so proud of my horse - my partner and friend.

I met so many amazing new friends on this ride, including Kathryn and Madison, who I enjoyed sharing horse stories with. Maddy, who is only 11, gave me some valuable tips on endurance riding - she is quite the horsewoman for her age. Then there was Cynthia, who shared my goal of riding the Tevis in 2013 at the Awards Dinner. And Linda, whose ridden Tevis twice and promised to take me out on the last 50 miles of the trail. And Teresa, who put her horse first and took a respectable RO (rider option - pulled herself from the competition when she became concerned about her horse). 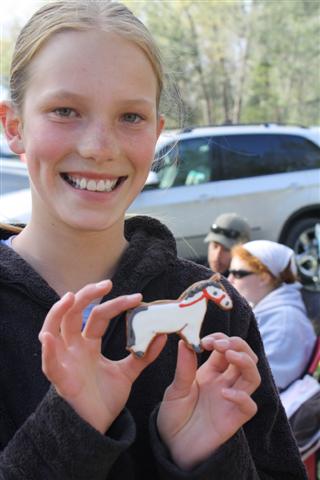 
Katie, who is graduating from nursing school at Humboldt State the same time I graduate from Chico State, said, "I have many friends I see only at endurance rides. But they are some of my best friends." 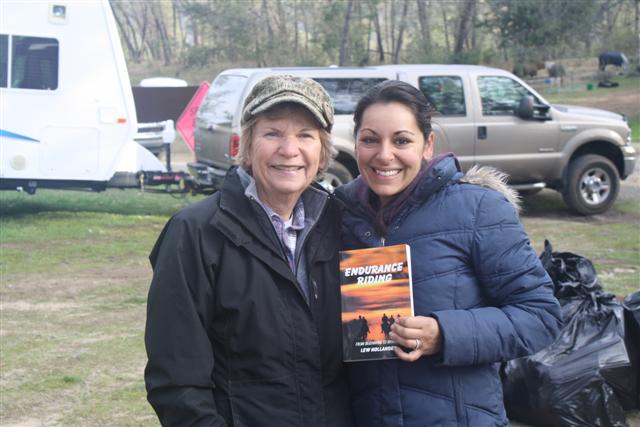 Ride Manager, Bonnie Sterling, and me with my First Time Rider award, an endurance book, which Bonnie signed for me.


Asali and I made it home on Sunday evening. It was a quite a challenge getting home. At the conclusion of our wonderful weekend, I ended up with an eye injury. Apparently, I had picked up some debris in my right eye sometime during the ride. All night on Saturday, I woke up in pain. My eye felt like it was on fire - it was red, slightly swollen, and constantly tearing. Sunday morning, after I packed up camp, I drove a few miles into town and pulled into the Sunset Urgent Care. Asali waited outside in the trailer as my eye was numbed, the debris scooped out, the eye flushed, and medicated with antibiotics. Because I had a deep corneal abrasion, the doctor decided to patch my eye. I ended up having to call my husband and mother to come get Asali and I in Redding because I could not drive. 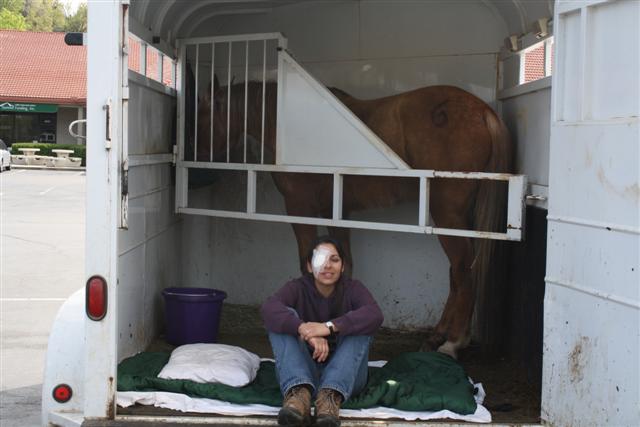 Asali and I relaxing in the back of the horse trailer, patiently waiting for Gary and Mom to arrive to take us home. 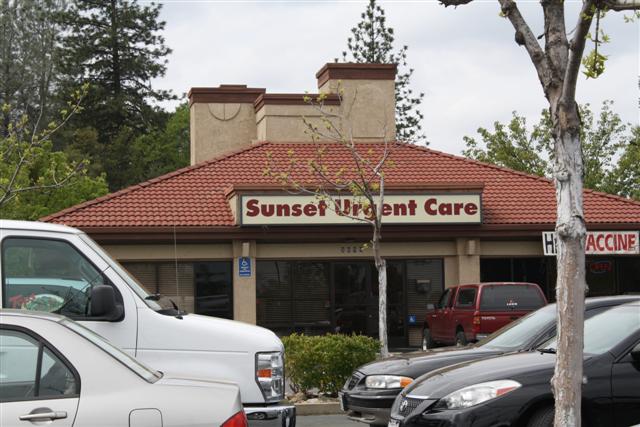 Thank you to Dr. Ramsayer, Jane, and Renee, who were all just as concerned about my horse waiting in the horse trailer as they were about me!

THANK YOU TO RIDE MANAGER, BONNIE STERLING, AND ALL THE INCREDIBLE VOLUNTEERS (AND VETS) WHO MADE THE WHISKEYTOWN CHASER A SUCCESS! SEE YOU NEXT YEAR - WE'LL BE RIDING THE 50!